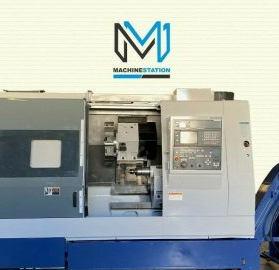 Japan is the third most innovative country in all over the world after the United States and Germany. It has enormous contributions to the advancement of machining tools, industrialization, and manufacturing. In 1889, the Ikebukuro Iron Works industry was first established, which manufactured the first machine. This framework prevailed and empowered Japan to become the third most significant country that excelled in manufacturing tools and machines. Along the same lines, here we will discuss the top machine tool enterprises in Japan. So, let’s begin.

50% of the company’s total production goes for export, while the rest of the 50% is used for domestic purposes. This company’s tools are exceptional regarding their rigidity, high precision, high cutting accuracy, and increased durability.

Alongside being one of the most renowned tool-manufacturing companies, the Okuma has developed its personalized CNC OSP controls since 1960. If compared for annual production with other companies, Okuma stands at number 5 worldwide.

As far as advancement is concerned, Okuma manufactured machines support a 5-axis vertical machining center, 5-axis horizontal machining center, and 5-axis composite machining centers. In China, Okuma is a very-well renowned company because the annual sales of CNC tools, various precision tools, and grinding machines cause the revenue of 400 million RMB only from China.

Mitsubishi was founded in 1884, and it is one of the most significant and largest heavy industry manufacturers in Japan. With a production capacity of 700 different types, Mitsubishi is not only the most diversified machines and tools manufacturing company, but it is the finest one with excellent quality.

Besides, Mitsubishi is among the top 500 companies globally, with 11 headquarters and six research centers in Japan. These research centers’ primary focus is to advance cutting-edge technology to view the relating problems and provide a durable solution to them.

Meanwhile, the best contribution of Mitsubishi is to mainstream 100% programmable machines that can get programmed conveniently. You only need to command the NC programs for grinding and dressing by putting the specifications for various parameters required to achieve the specified precision and accuracy.

Mori Seiki is also one of the largest and most well-known companies that manufacture tooling for machines. The company was established in 1948. It has become the most significant contributor to CNC machines in Japan and is a well-renowned company in China. There are headquarters of MoriSeiki at nine different places in China, and customer service is ensured all over China.

In 2011, the annual revenue generated by the MoriSeiki was $2 Billion, which will have been multiplied by several times until now. Additionally, Mori Seiki has started installing an assembly plant in Tianjin in China by investing $75 million. This plant is specialized in high-end CNC machine tools.

JteKt is a giant that owns KOYO and TOYOTA in Japan. These companies are the most prominent worldwide, with the most significant share of the steering system industry. In addition to the bearing industry, tooling industry, and transmission industry, the JteKt forms a combination of the most booming sectors that generate revenue of billions of dollars from all over the world.

Typically, JteKt aims to develop the exclusive technology to replace the present machining method with the turning method that could be more beneficial and less time-consuming. For example, under KOYO SEIKO’s supervision, which JteKt also owns, efforts are being made to improve gearbox manufacturing with an intelligent reduction in their prices for clients’ convenience.

China also seems, by all accounts, to be overwhelmed with the products made by JteKt, and the company generates a handsome revenue from China.

Sodick cooperation with Japan is one of the most critical integrating factors for sales, research, development, and manufacturing companies. Working on its goal of 2006 to expand its business globally, Sodick has its manufacturing plants in Japan, Thailand, Fukui, Kaga, Bangkok, Suzhou, and China.

In 1994, Sodick started manufacturing EDM machines and wire-cutting EDM machines in Suzhou, China. What’s more, the worldwide exports of Sodick allow it to collect the revenue of Billions of dollars annually, and China is the one that contributes the most significant part of its revenue after Japan.

Currently, Makino has put special efforts that integrate manufacturing processes with research & development and improved product design. With the mission statement of persistent expansion in their business and improving manufacturing, Makino has established its service centers in different Asian countries and its headquarters in Singapore.

Amada has been mainstreamed to manufacture sheet metal machinery and cut products in 1946, and according to the reports, Amada stands first in the list of manufacturers of similar products. That is why Amada enjoys an outstanding reputation in developed countries like the USA and Japan.

In 2001, Amada’s annual revenue reached 190 billion yen with 44,00 employees in their different branches. According to the company’s sales reports, Amada’s manufactured products are exported to around 100 countries.

Komatsu NTC limited Cooperation got established in 1945. The company is famous for manufacturing machining tools and high-quality precision metal equipment that is usually used in automobiles.

In collaboration with TOYOTA Motor, Komatsu NTC developed the world’s first three-dimensional five-axis laser cutting machine. For the time being, the company’s major working component belongs to the automation of the mechanism of power transmission for automobiles.

Since the year 1997, the company has been receiving the award for “supplier of the year” from general motors cooperation. Meanwhile, it comes up as Japan’s first company whose manufactured parts are widely exported to North, Central, and South America.

Aida is an integrating company that mainstreams products & design with production and sales of servo presses, high-speed presses, and stamping automation. It has been about 93 years since Aida manufactures industrial robots, punching machines, and numerous automated transmission devices.

Furthermore, Aida is well acknowledged for being the top manufacturer of forging machines that include servo presses, cold forging presses, large and multi-station presses, and high-speed presses.

Typically, the company’s products are famous for their high precision and high-speed and hence used in diversified industries. With the increasing demand for produced parts, this company has nine manufacturing plants worldwide. Five plants are situated in Japan, and the remaining four are in the USA, UK, China, and Singapore.

Japan is one of the leading countries extending its ventures to improve the tools and production of machines. Tool enterprises in Japan are putting their consistent efforts to create a winning situation for them. These tool enterprises are confined to Japan, but their business’s stretching frontiers and increasing need for customer services have led them to build their plants and service centers in other countries, especially China.